Hi! I hope everyone had a fabulous Christmas. My son was happy, therefore I did.  I also gave the blog a facelift to match The Season Jan/Feb issue. What do you think, do you like the new look? 😉

Today, I’m posting a Second Time Around Review by Katiebabs. Now since the book hasn’t released yet, it’s darn timely don’t you think? I would  like to mention, I’ve already seen Scoundrel’s Kiss on the Walmart book shelves, so after you read the review, you can run out and purchase it. Enjoy! 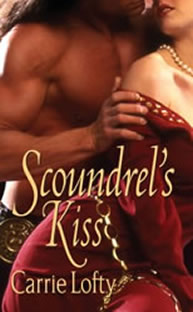 When it comes to temptation…

Turning his back on his old life as a rogue, Gavriel de Marqueda has joined a monastic order in Spain and taken a vow of chastity. Before he becomes a monk, he must pass one final test: help a woman who has lost her way. But when he lays eyes on Ada of Keyworth, he is tempted beyond measure by her sultry beauty and dangerous curves…

Rules are meant to be broken…

Far from her home in England, Ada has been battling inner demons for more than a year. When she discovers that her only friend has abandoned her, she has no choice but to grudgingly accept Gavriel’s help. But Ada is not fooled. Though Gavriel wears the robes of a monk, Ada sees that he is a virile man who looks at her with a hunger that matches her own–one that begs to be satisfied again and again….

After I finished reading Scoundrel’s Kiss, one word came to mind- beauty. The beauty is in the words as well as the way Carrie Lofty makes her characters come alive. That’s what I think of in regards to Scoundrel’s Kiss. Carrie has written a courageous powerful tale that will leave you breathless. Some historical romances are pure fluff and very much like wallpaper, where it is pretty to look at but nothing else. This is definitely not the case when it comes to Carrie’s writing.

Ada of Keyworth escaped her life in England for the country of Toledo after a she was held captive by a most evil man who tortured her, as well as breaking all ties with her sister, who she felt betrayed her. Ada still can’t get passed the demons that plague her and even though she is a learned woman and a scholar of many languages who has found patronage an important lady, the Condesa de Valdedrona. Ada suffers daily because she has become addicted to opium. Her addiction has consumed her and helps her cope. She is about to lose everything for a drug that gives her sweet release, even if it means selling herself.

Gavriel de Marqueda is a novice monk who has joined the Order of Santiago. Through this Order, he will find absolution for his soul. Gavriel also has internal demons because of his past and the blood he feels he still has on his hands. He has taken a vow of chastity and must abstain from violence. His final test is to save an unfortunate soul and provide spiritual guidance where they will turn to the Church and redeem themselves of their wicked ways. Gavriel spots Ada, who in her opium induced haze, has been placed on an auction block as a slave to be bought and used in any way her new master seems fit. Gavriel saves her and now must break her of her addiction before all hope is lost.

Gavriel and Ada will be pushed to their limits as they travel to safety where danger surrounds them. Ada drives Gavriel to the brink, a fine line where he wants to strangle her as well as hold her close and claim her as his woman. All Ada wants is to be free, away from Gavriel, but he forces her to confront her selfishness and greed, and now she has found a new addiction, which Gavriel never sees coming because Ada longs for his touch and kindness over the drug that almost brought her to near ruin.

Scoundrel’s Kiss is filled with despair, angst and such drama told in such an exquisite way that a reader cannot help but feel every emotion Gavriel and Ada go through. These two suffer incredibly and you long for them to find a small piece of happiness with one other.

Ada is an interesting type of heroine who is strong as well as stubborn but also very intelligent. She sees things with a very critical mind and even though she may seem weak and suffers, that is really not the case. She brings forth many surprises, as well as Gavriel whose life is changed the moment Ada comes into it. And even though these two insult and push each other away, those moments when they feel relief or enjoy a bit of tenderness with one another, leads to respect and an all consuming passion that in turns becomes love.

Scoundrel’s Kiss has a near epic type feel to it in an exotic land with so many twist and turns. Carrie Lofty is a masterful storyteller who kept me hooked until the very last page. This is one much recommended romance. (January, Zebra)