Back in December, I gave away 2 copies of Julia Templeton’s SINJIN for reader 2 readers to review. Well today I’m posting those reviews and giving away another 2 copies of SINJIN to 2 lucky commenters. 🙂 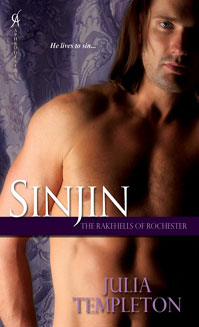 His Needs Consumed Him…

The oldest of the Rayborne brothers, Sinjin’s insatiable appetite for sex has earned him the nickname “Sin.” But his frequent visits to London’s most infamous pleasure houses must now come to an end. For a rogue who’s accustomed to indulging his every desire, one woman can never be enough…until Sinjin locks eyes with Katelyn Davenport, and knows she is the one woman he can’t get enough of…

Until He Met the One Woman Who Could Satisfy Them all…

Betrothed to a much older man in payment for her late father’s gambling debts, Katelyn dreads her wedding day—and her wedding night even more. When she meets Sinjin at a soirée intended to introduce him to the eligible young ladies of the ton, she envies the lucky woman who will ultimately become his bride. But when Sinjin seduces Katelyn, giving her just a taste of his legendary skills, she can only imagine herself in his bed every night.

This back cover blurb sucks. There is so much more going on inside this book and this blurb doesn’t convey what a really good book this is inside. If I went to a book store and read this back cover blurb I wouldn’t have bought the book and I would’ve missed out. There is a good plot inside. I also hate that the blurb attempts to thinly suggest that there’s a ménage in the book. There is but it isn’t with the hero or heroine as one would assume.

PROs
*  I have a needy husband; a five-year-old girl who I swear is the Queen of All Drama, and a fourteen-month-old boy. My time consists of my name being called the minute I try to sit down to do something for myself. Yet, no matter how many times stopped to play “which body part is this, mama I’m hungry, mama I don’t want to go to bed, honey where is, honey what about me . . .,” well, you get the point. I never once lost interest in the story. I never once thought about putting it off for another day. And by the way, I have several books by authors who are better known that I put aside and haven’t gotten around to picking back up again. I didn’t do that with this book.
* That being said I liked this author’s style. With my busy life I loved the fact that she was able to pack a punch with her narrative and dialogue with so few words. Even though her style is very straightforward and to the point without being overly prosy (is that a word), I never felt that it was too simplistic. I didn’t feel like I was made to feel like a two-year-old.
* The hero’s mama is full of awesomeness. You have to buy this book just to read about Sinjin’s mother. I laughed out loud when Mama came into the whorehouse to drag her son’s out.
a. Example of her awesomeness: “I dragged you and your brothers out of a filthy, dirty whorehouse this evening. Please do not speak to me as if you would to one of your many witless mistresses.” She shoots, she scores. Love, love, love her.
*  I really liked the heroine. To give a quick overview, Katelyn’s mother sold her to a man old enough to be her daddy. She feels trapped in a relationship with a man who is going to turn into a controlling, abusive, prick the second she says ‘I do.’ I sympathized and understood her reasoning for wanting to have a little bit of fun (well in her case, a lot of fun 🙂 ) before she’s forced to marry a man to secure her family’s fortune. I also understood her conflict. After realizing that she’s in love with Sinjin she’s wonders how can she go back to such a confining environment with her fiancé. She wants to escape her situation and find happiness for herself but is unsure if Sinjin feels the same way she does. I loved the fact that once she realized that Sinjin cared about her as well she was willing to do whatever it took to stay with him despite the furor it would cost her and her family if she broke off her engagement. It helps that her mother is a B-T-C H who sold her so she could pay off her father’s gambling debts and run around buying expensive presents for her young, delivery boy lover.
* I really liked Marilyn the heroine’s sister. Once she realized what was going on she was selfless and wanted her sister to be happy, even if it meant a reduction in her own circumstances. There are a couple scenes with the sister where Marilyn comes to the realization that maybe she isn’t attracted to men. Fair warning for the faint at heart, (but then again why are you reading erotica anyway) she’s kissed by another woman. I am interested in seeing how the author plays out the relationship/lesbian issue in the rest of this series. Is she really a lesbian or not. I can see the author going many different directions with this character.
* Speaking of secondary characters. They never did what I thought they would do and that’s a good thing. No matter how interesting the secondary characters were and yes, I could tell the author was setting things up for the sequels, I never felt as if they overshadowed the hero and heroine.
* I suppose this goes into the plot. It wasn’t just about sex, the hero and especially the heroine had real issues that they had to overcome and I found it believable how they handled these issues and attempted to overcome them.

CONs
*  My biggest problem with this novel is a problem I often see in erotic romance. I probably wouldn’t have mentioned this, but since I really liked this book, I expected more from the author. I felt that if she would’ve fixed the issue I had with this book, it would’ve been what I’d consider an A read. In my honest opinion, Sinjin and Katelyn fell in lust instead of in love, and I can’t see them having a happily ever after. I wish the author spent just a couple pages exploring why these two were meant to be together. Since this is an erotic romance it’s kinda a given that they will have great sex. I needed this author to bring a little something beyond that for these two characters
a. As an example. I’ve been on a Colin Firth kick lately and just finished watching Bridget Jones’s Diary. Since I’ll use any excuse to talk about my BF and I figure everyone has probably seen this movie (if you haven’t, WTF) I’ll use a couple scenes from this movie as an example.
i. 1st example: My BF and I are at a dinner party and as I am leaving he tells me why he likes me just the way I am. Even with my verbal diarrhea and vulgar mother.
ii. 2nd example: My BF has just helped me achieve a career making interview. As I am cooking dinner for my friends he arrives and helps me salvage the disaster. We’re in my apartment making an omelet joking around mimicking my mom and our parents’ friends. This discussion highlights the areas we have in common and how despite the misunderstandings between us we have a lasting connection and an attraction towards each other. The doorbell rings and I walk away. As I walk away my BF exhales, looks down, swallows, and loosens his tie. My BF is soooo hot and LOOOVES me and we haven’t even stuck our tongues down each other’s throats yet.
b. Unfortunately nothing similar to this happens in this book. Nothing that signifies deep feelings for one another, beyond the great sex. I felt that if there were one or two scenes that highlighted what made these two people made for each other, it would have pushed the story over the edge. (Side note: Yes, I am aware that I’m cuckoo for Coca Puffs and have issues, but hey it’s Colin Firth, sue me.)
c. My final con. The ending was too rushed and was just too pat and convenient. I’m talking about how Katelyn was able to get rid of her fiancé and be with Sinjin. But by that point I was so engrossed in the story it didn’t bother me as much as it should’ve. I was disappointed and thought she could’ve come up with a different way of bringing the couple together without the reader (or at least me) feeling a little let down that it was so easy. They didn’t really have to struggle to achieve their happily ever after.

Overall:
This was a good read. I found myself satisfied with the book and when I see this author’s works in the bookstore yes I will probably buy her next work despite the awful blurb.
My final grade for this book is based on the following scale:
A: Top 20 in their subgenre. I will keep it and re-read it and it will be my precious.
B: Great read. Will probably re-read my favorite parts.
C: Good story but have no interest in re-reading it.
D: Uggh, or maybe it just wasn’t my thing (usually happens with a UF series that everyone raves about).
E: I finished it.
F: I did not finish it.