This review is brought to you by Barbara at Happily Forever After. As you can see, she will review a book from time to time. 🙂 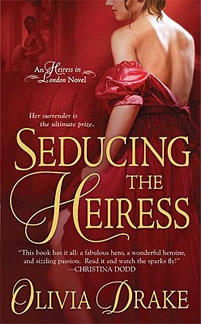 Her wealth and beauty have made Miss Portia Crompton the catch of the season. Secretly determined to wed the maharajah’s son she left behind in India, Portia ignores the money-hungry bucks who ply her with bouquets and bonbons. But one suitor will not be deterred: Colin Byrd, Viscount Ratcliffe. He is persistent and presumptuous—and wickedly tempting.

Colin has no delusions about romance. He’s a rogue, a womanizer, and a murderer, and seduction comes as easily to him as breathing. Portia’s fortune is an irresistible lure until Colin’s mercenary scheme hits a snag. Winning her dowry is no longer enough—he wants her heart and her passion. The more adamant she is in her refusal, the more determined he is to seduce her…

Drowning in debt, Colin, Lord Ratcliffe must find a way to get money or risk losing everything. He concocts a scheme to seduce the wealthiest and most desired heiress of the Season. Portia Crompton. It should be a simple enough task, seeing as Colin happens to be quite a ladies man and knows exactly what it will take to seduce his would be bride. Only problem is, he never expected the beautiful debutante to be so quick to catch on to his scheme.

Portia may be young, but she’s no fool. She knows full well that Ratcliffe merely desires her dowry to settle all of his gambling debts. She won’t deny her immediate attraction to the handsome rogue, but that doesn’t mean she’s about to fall for his schemes. With rumors of murder, a trail of women in his wake and of course his mountian high stack of debts, Ratcliffe is the last man Portia would ever consider entrusting her dowry to, let alone her heart.

Besides, Portia has plans of her own. She’s in love, and no one–especially not Ratcliffe–will stand in the way of her being with the man she truly wants to marry.

Ratcliffe, however, isn’t so easily dissuaded. Besides, he knows Portia desires him and it’s merely a matter of time before her will to refuse him breaks. But what begins as a test of wills soon turns in to an all consuming love that neither of them expected.

I absolutely adored this story! The on going banter between these two was witty, hilarious and gave me the same goofy smile I get whenever I read a Julia Quinn novel, lol. I’m definitely looking forward to the next book in this series!                 5/5