It’s always so nice to happen upon new authors, which is why it’s so lovely to have Rose Lerner–author of IN FOR A PENNY–here with us today. Please extend an ultra-warm welcome to Rose as she chats about the new phenom, costume drama monster movies. 🙂 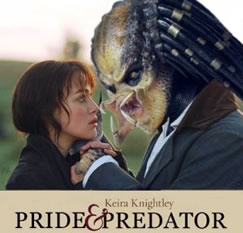 So I don’t know how many of you have heard about the possible upcoming production, Pride and Predator.

Personally, I’m excited.  Because I love the idea of costume drama monster movies.  And the only one I’ve ever seen is Ginger Snaps Back: the Beginning. Which I enjoyed because my very favorite musician Hugh Dillon played the fire-and-brimstone preacher, but which could definitely have had a more authentic period feel.  Why are monster movies all set in the present day?  There’s just no need for that!  So my friend Sonia and I sat down and came up with some concepts:

1. The Unholy Sepulchre. This one is about vampire Crusaders.  Think of how difficult it would be for them to wear those cloaks with the crosses on them!

2.  Vanguard Party.  This one is about a small unit of revolutionary Communist werewolves during the Russian Revolution.  Possibly they would liberate a labor camp in Siberia.  Werewolves look really dramatic in the snow.  (Important note: these would be people who turned into wolves.  Not people who turned into weird CGI hunched-over giant hairy people.  I have Strong Opinions about werewolf special effects!)

4.  Cowboys vs. the Blob.  I don’t know how cowboys would come up with enough cold to freeze the Blob, but I’m excited to find out!

5.  Running Scared. This is a World War Two movie in which submarines fight the Giant Squid.  Is the Giant Squid a Nazi? you may ask.  I’ll leave that creative decision up to you.

6.  Sacagawea fights Bigfoot!  It would be hard to make this movie not turn out racist.  But I think if you put some thought into it and did it right, it could be awesome.

7.  You know how there’s a type of B-movie where there’s an ancient monster sleeping under the earth, and then it’s disturbed by oil drilling or modern construction of some sort?  I think there should be a movie like this with Industrial Revolution coal miners. 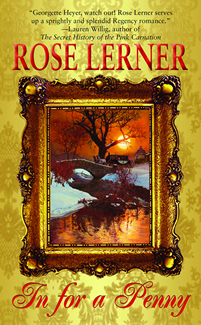 IN FOR A PENNY

No more drinking. No more gambling. And definitely no more mistress. Now that he’s inherited a mountain of debts and responsibility, Lord Nevinstoke has no choice but to start acting respectable. Especially if he wants to find a wife-better yet, a rich wife. Penelope Brown, a manufacturing heiress, seems the perfect choice. She’s pretty, rational, ladylike, and looking for a marriage based on companionship and mutual esteem.

IN FOR A POUND

But when they actually get to Nev’s family estate, all the respectability and reason in the world won’t be enough to deal with tenants on the edge of revolt, a menacing neighbor, and Nev’s family’s propensity for scandal. Overwhelmed but determined to set things right, Nev and Penelope have no one to turn to but each other. And to their surprise, that just might be enough.

9.  Dust monsters in the Great Depression!

10.  St. George and the Dragon.  Need I say more?  If you wanted, the dragon could be an alien, but it’s not necessary.

11.  Aliens land in medieval Japan and Samurai must defeat them–or learn that even though they look different, we can share the galaxy in peace, depending on what kind of alien movie this is.  I’m envisioning this as War of the Worlds-style aliens, but you could really take this in a lot of directions visually.

12.  Suffragettes vs. giant robots!  I’m a little surprised this hasn’t been done yet, what with the rise of steampunk and all.

13.  The Greek War of Independence (1821-1829), but with monsters from Greek mythology.  Byron would be a character, and possibly instead of dying of dysentery he would be eaten by a Cyclops.

14.  An alchemist accidentally creates a monster in his lab, and must defeat it before it destroys his entire city, and then–the world!

15.  In 19th century Cornwall, wreckers (who would loot ships that wrecked close to shore and sell the cargo, in extreme cases leaving the crew to drown or even killing them to cover up their illegal activities) are looting a ship–only to discover that it wrecked because the crew was eaten by monsters!  Possibly vampires because they’re fond of killing the crews of ships as their coffins are transported from Transylvania (which seems really impractical, as don’t you need the crews to, you know, run the ship?), but not necessarily.

My friend and I were also really excited about The Severed Hand of Franklin, in which Lord Franklin’s expedition looking for the Northwest Passage is murdered by the Abominable Snowman, and then it turned out there already was a horror novel about the Franklin expedition: The Terror

Suggest your own costume drama monster movies in the comments!  My favorite suggestion gets a signed copy of IN FOR A PENNY.

Thanks for having me on The Season!

For an additional opportunity to win IN FOR A PENNY plus a package of 10 (ten) of Rose’s favourite Regency-set novels, visit Rose at www.roselerner.com/contest.html