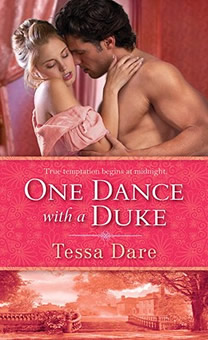 True temptation begins at midnight… A handsome and reclusive horse breeder, Spencer Dumarque, the fourth Duke of Morland, is a member of the exclusive Stud Club, an organization so select it has only ten members — yet membership is attainable to anyone with luck. And Spencer has plenty of it, along with an obsession with a prize horse, a dark secret, and, now, a reputation as the dashing “Duke of Midnight.” Each evening he selects one lady for a breathtaking midnight waltz. But none of the women catch his interest, and nobody ever bests the duke — until Lady Amelia d’Orsay tries her luck.

In a moment of desperation, the unconventional beauty claims the duke’s dance and unwittingly steals his heart. When Amelia demands that Spencer forgive her scapegrace brother’s debts, she never imagines that her game of wits and words will lead to breathless passion and a steamy proposal. Still, Spencer is a man of mystery, perhaps connected to the shocking murder of the Stud Club’s founder. Will Amelia lose her heart in this reckless wager or win everlasting love?

Before I launch into my review, I have to confess that Tessa Dare is one of my favorite authors in historical romance. Her writing is witty and inventive without ever seeming to call attention to itself the way witty and inventive writing often does. Her characters are interesting and imperfect. Her love scenes are beautifully written—hot and sexy without ever seeming crass or overwrought.

That said, I didn’t love the last book in her first trilogy, A Lady of Persuasion. For a number of reasons, I didn’t “click” with either the hero or the heroine, and I found the story lacked sufficient conflict and tension to sustain my interest. In the end, that book was a DNF for me despite my appreciation for Ms. Dare’s many talents as a writer.

As a result, I approached reading the first book in her new “Stud Club” trilogy, One Dance with a Duke with some trepidation. Would I like it enough to keep her on my auto-buy list or would I find it lacking as I had the previous book and have to demote her to “if I’m in the right mood and it’s 25% off the cover price” status?

I’m pleased to report that Ms. Dare remains solidly in the auto-buy category.

One Dance With a Duke begins like many a Regency romance with a ball, but with a twist. Spencer Dumarque, the Duke of Morland, has a habit of appearing at the stroke of midnight, choosing one eligible young lady to dance with, then leaving as swiftly as he appeared. On this particular night, however, he doesn’t choose his partner; Amelia D’Orsay chooses him, hoping to convince the duke to forgive the four hundred pound debt her brother owes him—one the perpetually impoverished but exceptionally genteel D’Orsays cannot afford to pay. This he refuses to do, but he does find Amelia gets under his skin, and when he becomes dizzy (we later learn he suffers from claustrophobia), he sweeps Amelia literally off her feet to escape the ballroom.

While they are alone on the terrace, two gentlemen arrive to inform Spencer that Leo, the founder of the so-called Stud Club—a group whose membership is defined by ownership of a token representing a share of interest in a racehorse that has been put out to stud—has been brutally murdered and that the three of them must go to inform the dead man’s sister of his demise. Amelia insists on accompanying them as she doesn’t believe the men have a clue how to break the news, and thus sets in motion the chain of events that leads to Amelia and Spencer’s precipitous marriage and the two primary elements of conflict between them: Amelia’s devotion to her family and the question of whether Spencer may have arranged for Leo’s murder.

What’s masterful about this whole setup is that Ms. Dare manages to lay all these elements out in such a way that it’s neither confusing nor implausible (although it probably seems both when I try to explain it here). But what I love most about this book is the author’s ability to ratchet up the romantic and sexual tension with beautiful and unexpected imagery. Here’s one of my favorite examples, from Amelia and Spencer’s first kiss:

His lips brushed hers, slowly, sensually. And in an abrupt, volcanic explosion, Amelia D’Orsay’s world gained a whole new continent.

She’d suffered a number of Mr. Poste’s kisses, back when he’d courted her. Could it truly have been almost ten years ago? Those horrid kisses still lurked in her memory: wet, grabby embraces that made her feel helpless and ashamed.

But this was different. So different. The Duke of Morland had spent the past several hours assaulting her feelings with one rude, arrogant remark after the other. The man had no notion of polite discourse.

But this kiss…now, this kiss was a conversation.

In another, Amelia reflects on her nervousness before her hurried wedding:

Truly, Amelia felt as though she’d swallowed all three of his nimble little seamstresses, and they were currently stitching the lining of her stomach into pleats.

Those are just two brief examples of what makes this book such a joy to read. The ultimate resolution of Amelia and Spencer’s romance is heartfelt, touching, and believable.

If there is any issue with this book, it’s the fact that Leo’s murder is not resolved within its pages, and I suspect it will not be until the final book in the trilogy. There are good reasons for that, but if you like to get all the answers to all elements of the plot by the end of a book, you may be disappointed by One Dance with a Duke. I, on the other hand, am looking forward to the next two books, because reading all three to find out “whodunit” won’t be a burden at all.

If you enjoy the writing style of Judith Ivory, the heat level of Lisa Kleypas, and the humor of Julia Quinn, I can guarantee you’ll love One Dance with a Duke.