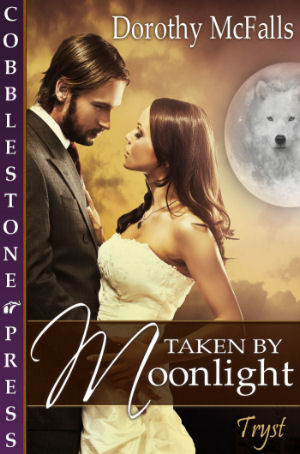 Bored of society’s ballrooms and events, Lady Amelia wants more from life. But not to be kidnapped! A rogue with a wildness that both frightens and excites her steals her away from the only family she’s ever known and tosses her into a world of werewolves and danger.

Dimitri, a lone wolf who plays by his own rules, agreed to capture Lia and bring her to back to his former wolf pack. According to his sister, Lia is the pack’s last hope for survival. But once Dimitri has her, will he be able to let this beguiling she-wolf go?

Dorothy McFalls has crafted a suspenseful Regency paranormal novella that will keep you turning the pages until the end.

Dimitri, Lord Carew, is the new catch of the London season—but everything about him contains an air of mystery, from the manner he came by his title to his sensuous, dark looks and strange accent.

Lady Amelia Routledge is tired of senseless admirers and yearns to fill a powerful restlessness in her that cannot be named.

At a ball, she locks eyes with the enigmatic Carew and soon finds herself in the garden kissing him—and compromised.

But bad goes to worse when she is kidnapped and taken to be the mate of the alpha wolf of Dimitri’s pack—a wild, untamed wolf who wants to mate with her and possess her by brute force, because according to prophecy, only she can save the pack.

Dimitri is a lone wolf/man who must obey his leader unquestionably or pay with his life. But what will he do if his feelings for Lia get in the way? And what will happen if the only way he can save her from the alpha is to possess her himself?

Why does the pack want Lia? What is the strange restlessness that drives her?