I haven’t done one of these in awhile. Well it’s time to get back to them because excerpts–in my opinion–is one of the best ways to engage a reader. Today, please welcome the lovely Darcy Burke whose debut HER WICKED WAYS releases early May. Isn’t the cover just lovely? You can read a longer excerpt on her website. 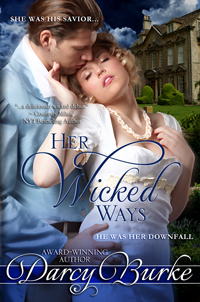 She was his savior

Banished from London for her reckless behavior, Lady Miranda Sinclair is robbed by a dashing highwayman en route to the country. By offering him a kiss in lieu of the jewels she had to leave behind, she commits the very type of act that caused her exile. When her dour guardians extend her punishment to performing charitable work at the local orphanage, she’s further tempted by the home’s owner, a provincial gentleman who stirs her passion in a most wicked way.

He was her downfall

Desperate to save his orphanage from financial catastrophe, Montgomery “Fox” Foxcroft leads a double life as a highwayman. The arrival of wealthy, well-connected Miranda, whose kiss he can’t forget, presents a lawful opportunity to increase his coffers. His problems seem solved—until she rejects his suit. Out of options and falling for the heiress, Fox must risk what principles he has left and take advantage of her wicked ways—even if it ruins them both.

Miranda stopped short on the small landing outside the back door. Though dark enough for her eyes to deceive her, she felt certain someone stood not twenty feet away.

Reason told her to turn around, but reason was vastly overrated. Besides, the nape of her neck tingled with anticipation. Somehow she knew who lingered in the yard. She stepped into the soft grass. “Who’s there?”

“You promised we would meet again. I got tired of waiting.”

He sauntered toward her, pausing a few feet away.

The cool night breeze stirred her hair. Miranda brushed a stray lock from her face. “Have you been skulking about the back entrances of every house in the district, or did you somehow know to find me here?”

“I have ways of finding what I need.” He leaned against a pear tree.

Miranda heard the smile in his voice. Go inside, her mind screamed. But other, less sensible parts of her body drove her forward until she stood before him. A mask covered his entire head, save his mouth and chin. Pity, for she dearly wanted to see his face.

“Mmm. I did.” His deep voice sounded husky, alluring. He stepped closer, and she could feel the warmth of his body.

“Perhaps some things are worth any risk.” He tucked her hair behind her ear, his finger tracing along her sensitive flesh.

She pulled her dressing gown tighter against the chill night air. So many nights she’d walked in the garden, and she’d never considered she might encounter someone. Let alone her highwayman.

“It’s cold.” The highwayman pulled his cloak from his shoulders and wrapped it around her. Immediately, she was ensconced in delicious heat.

He reached out and pulled her against him, his arms encircling her back. His legs were parted and he positioned her between them. “Now, I am not.”

She should rip his cloak off and run back into the house, but she couldn’t move. Couldn’t do anything but gaze up into his masked face. “Have you come to ransom me?”

His hands held her close. “That hadn’t occurred to me, but that is an excellent notion.”

Her heart beat a staccato rhythm in her chest. “If you aren’t here to take me away, why have you come?”

“For another kiss, perhaps.” His warm breath caressed her temple.

Miranda shivered. “I should go back.”

His lips brushed her cheek. The rough cotton of his mask grazed the side of her face, her ear. “I won’t stop you.”

She placed her hands on his shoulders, opening the cloak, leaving less between them. Then his mouth touched hers, and her knees went weak. She gripped him tighter, lest she tumble to the earth.

Her frustration and loneliness—yes, loneliness she now realized—faded in his kiss. Where she’d been bold during their previous encounter, she let him lead her, content to do his will. One of his hands cupped the back of her head as his lips parted over hers. His tongue swept against her, and she opened for him, welcomed him inside.

His kiss deepened, his hands holding her firm, steady, captive. Her head dropped back under his onslaught. Yes, command me. Desire pulsed through her body, throbbed between her thighs. Make me yours.

He trailed kisses along her jaw. Finding her earlobe, he nipped it, eliciting a shudder of longing that seemed to make her body curl in upon itself. His right hand tangled in her hair while his left coasted over her shoulder and settled just above her breast, the warmth of his bare palm heating her flesh through the thin cotton of her nightrail.

She did falter then, slumping against him with a faint moan. His hand moved down her body, cradled her hip, pulled her against his hardness.

A thump from the house froze their movements. He stood straight, breathed against her forehead.

She pushed his cloak from her shoulders and thrust it at him. “You have to go. I can’t be caught out here with you. Please!” She shoved at him, and he stepped back.

She pivoted and hurried to the house. At the door she turned to see if he remained.

His silhouette was recognizable next to the tree. “Until next time, then.”

She stepped inside and pulled the door shut. There couldn’t be a next time.