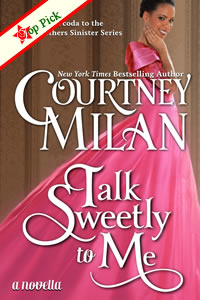 Nobody knows who Miss Rose Sweetly is, and she prefers it that way. She’s a shy, mathematically-minded shopkeeper’s daughter who dreams of the stars. Women like her only ever come to attention through scandal. She’ll take obscurity, thank you very much. All of England knows who Stephen Shaughnessy is. He’s an infamous advice columnist and a known rake. When he moves into the house next door to Rose, she discovers that he’s also wickedly funny, devilishly flirtatious, and heart-stoppingly handsome. But when he takes an interest in her mathematical work, she realizes that Mr. Shaughnessy isn’t just a scandal waiting to happen. He’s waiting to happen to her…and if she’s not careful, she’ll give in to certain ruination. Talk Sweetly to Me is the final novella in The Brothers Sinister series.

The other books in the series are:

You know you thoroughly enjoyed a book when you don’t want it to end.

That’s how I felt about Courtney Milan’s novella, Talk Sweetly To Me. I wanted to follow them headlong into their HEA. I wanted the wedding, the babies; I wanted it all.

And honestly, there’s simply nothing to not love about this book. The heroine, Rose Sweetly, is nothing short of brilliant. Her brain is a veritable calculator and she works as a “computer” (one who computes) for an astronomer. Not only is her talent rare in a woman in 1882, but it’s even rarer in a beautiful, twenty-year-old black woman, which Rose is.

Rose is also terribly sweet and innocent (no pun intended) and the hero, Stephen Shaughnessy is a dyed in the wool ladies man. He’s a writer, and honestly, what’s not to like about that. But as an Irish man in England during this time, he was not held in the greatest esteem by the Brits. Ladies adored his handsome face, his laid-back charm, but to many he was only good enough to bed and that’s all.

I can only say I was utterly charmed by Stephen. And it’s easy to see why Rose is so smitten with him. But their differences are many, so she keeps her distance. Until she doesn’t anymore. Through Stephen machinations, she finds herself spending a great deal of her working hours with him, which Stephen uses to his advantage. He doesn’t necessarily set out to seduce us, but he does.

And what a sweet seduction it was. I loved every single word of it. One of the things I really loved about Stephen was that he could be humorously self-deprecating

“Are you trying to intrigue me by hinting at hidden depths, Mr Shaughnessy?”

He shrugged. “Why would I? I don’t even have hidden shallows.”

And I laughed every time he’d say, “Talk sweetly to me.” In my head all I could hear was the song, Talk Dirty to Me.

This is a novella, so I didn’t expect the kind of love scenes I’d usually find in a full-length novel. But I must say I thought their love scenes were perfectly appropriate for the story; a nice mixture of sweetness, passion and heat. And even then, Stephen managed to amuse me again.

“We need more astronomical events,” he said. “Because I am not waiting until the year 2004 to do this again.”

Seriously, I wanted an entire novel devoted to their courtship, that’s how much I enjoyed the two of them together and apart.

But while there are many light moments in scenes including Stephen, there is subplot that deals with the prejudices that were widespread during the time.

Rose’s sister, Patricia, is pregnant with her first child. Rose is staying with her while her brother-in-law is away. The doctor attending her sister is… Let’s just say I wanted to take a couple of swings at him myself.

I really loved the way Courtney handled the whole situation with the doctor. In dealing with the issue of racism, she doesn’t bang you over the head with it and make it overwhelm the story. There’s no way she can’t not acknowledge its existence, especially during this time. But the story is a romance to the very core, and she’s careful to keep the story focused on Rose’s inner turmoil regarding a relationship with Stephen.

When I got to the end of this novella all I could do was smile. That’s how it made me feel. Hopeful. Happy. Pleased. So what else can I say but, Go right now and buy this book. The writing is top-notch, the story beautiful, and the characters fully developed. And at .99, this novella is a steal. A steal. My only gripe is I wish it were longer.