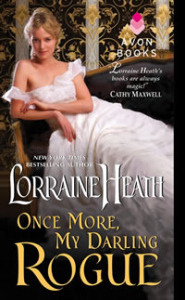 They are England’s most eligible bachelors, with the most scandalous reputations. But for the right woman, even an unrepentant rogue may mend his ways . . .

Born to the street but raised within the aristocracy, Drake Darling can’t escape his sordid beginnings. Not when Lady Ophelia Lyttleton snubs him at every turn, a constant reminder he’s not truly one of them. But after rescuing her from a mysterious drowning, he realizes she doesn’t remember who she is. With plans to bring her to heel, he insists she’s his housekeeper—never expecting to fall for the charming beauty.

While Ophelia might not recall her life before Drake, she has little doubt she belongs with him. The desire she feels for her dark, brooding employer can’t be denied, regardless of consequences. So when Ophelia’s memory returns, she is devastated by the depth of his betrayal. Now Drake must risk everything to prove she can trust this rogue with her heart once more.

Other series in the Scandalous Gentlemen of St. James series:

When you despise a heroine right from page one, that’s hard to overcome. Our story opens with Lady Ophelia Lyttleton calling Drake Darling “Boy,” and ordering him to bring her a glass of champagne at a ball. Drake is not a noble, but he is the adopted son of a duke, and has not done one thing to deserve Ophelia’s spitefulness. Yet, he takes her abuse, because he has his own issues of self worth. Later that evening, he rescues a mud covered lady from near drowning, and takes her to his home to recover. To his amazement, underneath the mud is Lady Ophelia, and she appears to have lost her memory. All of her slights of him come to his mind, and he decides it’s time for a little payback. For one day, he’ll make her believe she’s his servant, then he’ll take her home.

Ophelia accepts without question that she’s Drake’s servant. Without her haughty heiress attitude, she’s a different person. To Drake’s amazement, she’s pleasant, humble, and a hard worker. The circumstances of her accident are somewhat hazy, so Drake begins investigating, and has a hunch she may be in danger. He delays taking her home, telling himself that he’s protecting her. With each day, they grow closer and soon begin an affair. Without her prejudices blinding her, Ophelia (now called “Phee”) sees the real man Drake is. She’s a different person, that is, until her memory comes back.

I have very mixed feelings about this book. I initially loved Drake, and I actually couldn’t fault him for wanting to get a little of his own back. But I couldn’t justify his keeping Ophelia in the dark about who she was. And while Ophelia seemed changed, with her returning memory, came her old witchy persona.  Despite what happened to her in the past, I can’t forgive her for her awful public disrespect of Drake. A lot of comparisons have been made between this book and the movie “Overboard,” and I confess, that this is what immediately came to my mind when reading it. There are many good things to say about this book – the mysteries of Ophelia’s accident, and what happened to make her the nasty person she was. I love that this series of books is about the children of the characters from The Scoundrels of St. James, Lorraine Heath’s previous series. There is one wonderful scene at the end between Drake and his adopted father that brought tears to my eyes. If you enjoy stories of redemption and self-forgiveness, this one may be just right for you.