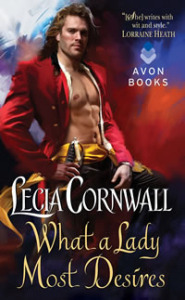 On the night before the final battle against Napoleon, Lady Delphine St. James finds herself dancing with the one man she has always wanted, Major Lord Stephen Ives. He makes it clear he has no time for a lady he sees as flirtatious and silly, but as the call to arms sounds, she bids him farewell with a kiss that stirs them both. When he returns gravely injured, she is intent on caring for him, even if his surly behavior tests her patience.

After the battle, Stephen is not only wounded and blind, but falsely accused of cowardice and theft. The only light in his dark world is Delphine, the one woman he never imagined he could desire. But she deserves more than he can give her.

As their feelings deepen and hidden enemies conspire to force them to part forever, can their love survive the cruelest test of all?

Confession time: I don’t typically read Historicals based around the Napoleonic Wars.

I’ve never been a fan, but Cornwall changed my mind. It started with How to Deceive a Duke, I was instantly mesmerized by the hero and heroine. Then they got caught up in the final battle of the war, and the resolutions didn’t happen too smoothly, but overall I wanted to read more from this time period.

Lucky for me Cornwall wrote two more books in the same series, and this is the latest. This book is less about the war though and more about the aftermath. Including a hero who’s injured and doesn’t believe he’s worth anything, until the heroine, Delphine comes along determined to heal him.

Stephen, our injured war veteran believes his would-be savior to be selfish, spoiled, and the exact opposite of what he’s looking for. Too bad he can’t get her off his mind. Too bad she’s so smitten with him she’ll break every rule of etiquette to be close to him, which leads to scorching tension and few too unbelievable moments. I’ll admit I kept expecting them to get caught.

Delphine is the carefully raised debutante who wants more from life then to be a trophy on someone’s arm. I loved her. She’s determined to be her own woman, and the intelligence she displays is marvelous. I also enjoyed her character because she doesn’t play anyone false. Blunt and practical is her way of dealing with people.

As to the details, Cornwall does a marvelous job with details. I’ll say this is probably one of the most error free ARC I’ve read in a long while. The pacing and plot move along at a fine pace and though our hero likes to assume things. A lot. I found myself able to look past it and chalk his actions up to insecurities— he lost the last woman he was in love with to a jewel thief.

Another great bit is this book has a true villain. He’s downright dastardly and I’m thankful for the heart pounding pages where I really thought he’d get away with everything.

Overall, if you enjoyed stories of soldiers, injured men in need of healing, and women who are tough then this might be good one to pick up. Also, fans of Cornwall will enjoy see the main characters from How to Deceive a Duke. I love me some Nicholas Temberley.