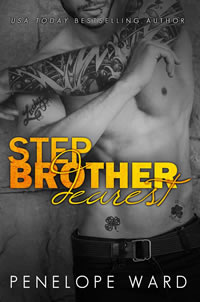 You’re not supposed to want the one who torments you.

When my stepbrother, Elec, came to live with us my senior year, I wasn’t prepared for how much of a jerk he’d be.

I hated that he took it out on me because he didn’t want to be here.
I hated that he brought girls from our high school back to his room.
But what I hated the most was the unwanted way my body reacted to him.

At first, I thought all he had going for him were his rock-hard tattooed abs and chiseled face. But things started changing between us, and it all came to a head one night.

Then, just as quickly as he’d come into my life, he was gone back to California.

It had been years since I’d seen Elec.

When tragedy struck our family, I’d have to face him again.

And holy hell, the teenager who made me crazy was now a man that drove me insane.

I had a feeling my heart was about to get broken again.

I think the only fair way to review and rate  Stepbrother Dearest is to do so by parts—part one and part two. Exactly the way the book is written.

Now, to say that I was dying to read this book when I saw the cover and read the blurb this summer would be putting it mildly. It pushed all my must-read buttons. Surly, gorgeous, cocky hero forced to live with his new stepsister. The possibilities there are endless. Endless. And part one did indeed live up to my expectations. It gets a solid 4.5 stars (Recommended).

I got Elec. I understood why he was such an ass to Greta. He didn’t really dislike her. He disliked the situation he was in. And like many teenagers, he acted out. Acting out as in tormenting her by eavesdropping on phone conversations with her friends and talking shit about everyone and everything—especially his father and stepmother.

Mom was the first to speak. “Elec, what do you think of Boston so far?

“Seeing as though I’ve ventured nowhere but this house, it sucks ass.”

Randy slammed his fork down. “Can you show some respect to your stepmother for five seconds?”

“That depends. Can she stop boozing it up for the same amount of time? I knew you married a cheater, Daddy, but a lush, too?”

Yes, Elec has some serious Daddy issues. In part two, you learn the whole story behind all his deep-seated resentment.

I’ve read a couple reviews where the reviewers absolutely hate the way Elec treated Greta. I, on the other hand, thought he was acting like the surly, rebellious (many tattoos and multiple piercing—piercings in some very interesting places) teenager he is. And even at the peak of his teenage surliness, his actions show that he does care for Gretna; that he’s looking out for her.

And like many a teenage hormone-driven girls, Gretna is immediately attracted to Elec. C’mon, he’s the quintessential gorgeous bad boy.  She knows he’s a total tool but she can’t help that she finds him attractive. I understand that and didn’t fault her for not treating him like the seventeen-year-old me would have. She’s simply a nicer person than I was at that age.

He probably didn’t even leave me a tip. I opened I and gasped when along with a twenty-dollar bill was my favorite black lace thong and written in pen on the check:

Keep the change, or rather, change into these. I’m guessing your current ones are a little wet.

LOL. Yeah, he was one cocky son-of-a-bitch.

Honestly, I loved part one. The build up to the inevitable is wonderful. I completely devoured every word and every page, and my heart broke along with theirs when they went their separate ways.

Part two—seven years later—starts out strong. Elec’s father dies, bringing both Elec and Greta back to Boston. Both have ostensibly moved on with their lives. Greta has a failed engagement under her belt and Elec…well, he’s currently involved with someone else.

That was like a blow to the gut. I should have expected it but it really did take me by surprise. But I was ready for that kind of juicy conflict. And it was—to a degree.

I’ll tell you what just didn’t work for me. It was Elec—in the form of a book he’d written—retelling the first part of the book. Which means readers get it from his POV. And this wasn’t a five-page recap. This ended up being literally chapters of a replay of it.

I may be biased because I’m not one for reading the same book in the other character’s POV. It’s one thing to get the story in alternating POVs. But it’s a whole other thing to read through it once and then have to read through it all over again. That’s how I found myself skimming a good part of his “story.” Ms. Ward wrote the part one well enough that I didn’t need it retold by Elec. So that’s where the book fell short for me.

What I did like about part two is that Elec has grown in the ensuing years. Gone is the moody, smart-aleck boy and in his place is a fully grown man. A man who has matured. There is so much that’s bittersweet about their reunion and the days during and after the funeral that Greta and Elec spend together. And I did like the monkey wrench his girlfriend put in them getting back together right away. I also enjoyed the epilogue. I’m a total sucker for those. I wanted that kind of HEA and I’m glad Ms. Ward gave it to us.

All in all, it was an engaging read, which I read in two sittings in the total span of 12 hours. And for that it gets a solid 4 stars from me. I’ll now go happily on to pick up another one of Ms. Ward’s backlist titles.