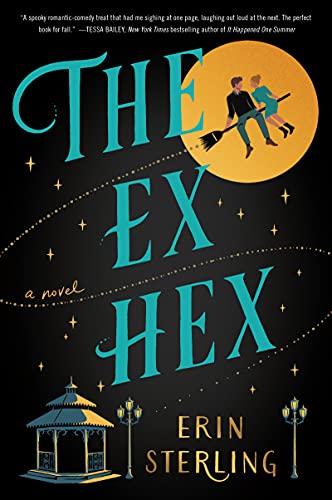 Nine years ago, Vivienne Jones nursed her broken heart like any young witch would: vodka, weepy music, bubble baths…and a curse on the horrible boyfriend. Sure, Vivi knows she shouldn’t use her magic this way, but with only an “orchard hayride” scented candle on hand, she isn’t worried it will cause him anything more than a bad hair day or two.

That is until Rhys Penhallow, descendent of the town’s ancestors, breaker of hearts, and annoyingly just as gorgeous as he always was, returns to Graves Glen, Georgia. What should be a quick trip to recharge the town’s ley lines and make an appearance at the annual fall festival turns disastrously wrong. With one calamity after another striking Rhys, Vivi realizes her silly little Ex Hex may not have been so harmless after all.

Suddenly, Graves Glen is under attack from murderous wind-up toys, a pissed off ghost, and a talking cat with some interesting things to say. Vivi and Rhys have to ignore their off the charts chemistry to work together to save the town and find a way to break the break-up curse before it’s too late.

The Ex Hex by Erin Sterling is a fun witchy tale about the town of Graves Glen, Georgia and its’ history. Graves Glen is home to a large number of witches and wizards, there is even a full college for them! Kind of like Hogwarts but on an American small town scale. Normal non-witches live in Graves Glen as well so the magical side of the city is kept on the down low. Which starts to become an issue when Vivienne Jones suspects that a curse she had jokingly put on her ex-boyfriend Rhys Penhallow ten years ago is now back in action in full force, causing disaster after disaster to their small town. Vivienne and Rhys team up to try to get the curse reversed and set the town back to normal.

I loved this book! It was so much fun to read and there were several laugh out loud moments, I actually would stop and re-read certain dialogues just to giggle all over again. This was my first book by Erin Sterling, but it definitely will not be my last. Both Vivienne and Rhys had a lot of growing up to do, and they both really matured throughout the story. It was clear from the start that there was a significant attraction on both parts, but because of what had happened in the past they were both trying to fight it and stay away from each other. This just added a layer of sexual tension to the story, which was so steamy to read, especially the moments when they did give into each other.

The side characters were also great to get to know as well, especially Vivi’s aunt and cousin who both are strong, and funny characters. I am really hoping there are more books in this series with them as the focus, I would love to know more about how it goes with Vivi’s cousin and her love life.

One thing that I was a little unrealistic was how casually the characters seemed to be taking the problem. The whole town is now cursed! Hello! You would think that everyone would be on top of finding a way to solve this problem, but it seemed like everyone was kind of just waiting around and kissing each other until everything came to a head. That would be the only reason I did not give this a full 5 stars, I was reading some parts being like “Hello!! Why are you just sitting there??”

Overall, I highly recommend this book. Great fun to read and a good cast of characters and a great story.