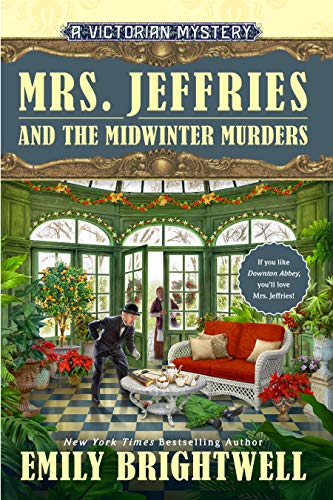 Harriet Andover had no intention of dying young like her silly siblings had. She intended to outlive them and outdo them as she always had. But Harriet discovers that the best intentions can lead to murder when she is strangled inside her mansion with a house full of holiday guests.

As much as Inspector Witherspoon enjoys his job delivering justice, the last thing he wanted was a complicated murder case just a week before Christmas. He soon discovers that Harriet’s own husband and grown stepchildren are not overcome with grief and neither are most of her friends. And to put the icing on the Christmas cookies, the room where Harriet’s body was found was locked from the inside and she had the only key in her pocket.

Mrs. Jeffries and the household have no intention of letting their inspector down and learn that Harriet’s sister may have died from foul play as well. As the clues mount, this dedicated band of merry sleuths will not rest until they’ve delivered a stocking full of coal to a crafty killer.

It’s almost Christmas when Inspector Witherspoon is called to the scene of his latest murder case. Wealthy businesswoman Harriet Andover is found strangled in her locked study. It seems it must be a member of her household and uncovering motives is easy, but proving who committed this terrible crime turns out to be much harder. Fortunately, Witherspoon has the hard-working Constable Barnes working alongside him at the crime scene. In addition, although he is unaware of this, his household staff and a couple of close friends help him gather clues. Mrs. Jeffries, his housekeeper, is the leader of these unofficial investigations and is able to put all the evidence together to identify the killer and find ways to make sure Witherspoon has all the information needed to get justice for the victim.

This book is part of a long-running series, but the author does a good job of including the necessary information about the main characters to bring readers who are new to the series up to speed. The reader is given the clues right along with Mrs. Jeffries and the Inspector, and will be able to figure out some, but probably not all, of the details of the case. I was pleased that all of the members of the household contribute equally to the case, without any one character dominating the book. Less satisfying is the fact that there seems to be less scenes showing the actual investigation. Things start coming together for Mrs. Jeffries and for Witherspoon, and the conclusion of the case makes sense with the clues that are given throughout the book.

The book takes place in Victorian England around Christmastime. However, except for a few passages about some of the decorations in the victim’s house, I was disappointed that there weren’t more details about holiday preparations and customs of the times. I think for a book coming out this time of year, this is a missed opportunity. There are two major developments not related to the case, that take place right at the end of the book. Without giving anything away, one is related to the personal life of a main character, and I look forward to seeing how it plays out in future books. The other is the return of Witherspoon’s nemesis Inspector Nigel Nivens. This is rumored at the very beginning of the book, but more about this is revealed at the very end. After the events of the prior book, I thought we had seen the last of him, but unfortunately it looks like he’ll be back to cause more trouble in the next book. In spite of this, I enjoyed the book and think fans of the series as well as fans of Victoria Thompson or of Anne Perry’s holiday mysteries will like it as well.