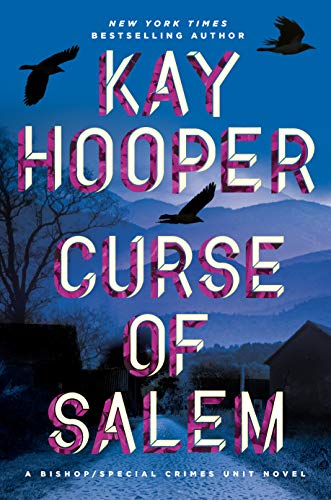 The small town of Salem has been quiet for months—or so Bishop and his elite Special Crimes Unit believe.  But then Hollis Templeton and Diana Hayes receive a warning in Diana’s eerie “gray time” between the world of the living and the realm of the dead that a twisted killer is stalking Salem, bent on destroying in the most bloody and horrifying way possible the five families that founded the town.

The stakes are high, especially for new friends Nellie Cavendish and Finn Deverell, both members of the Five, and this time Bishop and his wife Miranda will lead the team to hunt down a vicious killer and uncover a dark and ancient curse haunting Salem.

Several members of the FBI’s Special Crimes Unit arrive in the town of Salem to investigate a case involving a possible serial killer. They are called to the town in two different ways. One is the typical way in which Finn Deverell, the Chief Deputy of Salem contacts the leader of the team for help. The second is more unconventional – two team members receive a psychic summons from a spirit guide that they are needed in Salem as soon as possible. They learn the killer could be targeting members of the town’s five founding families and their contact, Finn, could be one of the citizens who is in danger.

It has been a while since I’ve read a book by this author. Hooper does a good job of sharing the important background information about the characters and the main premise of the series. My favorite characters are Bishop and his wife Miranda. Bishop is a great leader and both he and Miranda wisely use their special skills as well as their intelligence to investigate the case. The rest of the team works well together, using their unique psychic talents to solve an unusual series of crimes. Even though I was able to quickly get to know the main characters, getting a feel for the whole world of the Special Crimes Unit was somewhat overwhelming. All of the references to shields and energy are one thing, but when several crows started helping with the investigation, that was a little too much for me.

Some of the descriptions of the murderer’s actions were gory, so this is not a cozy read by any means. However, the core of the investigation interested me. I like how the FBI worked with local law enforcement and others, who also had psychic abilities, to identify the killer and the motive. The book gets better as the story progresses. The last several chapters are tense and suspenseful as additional Salem residents find themselves in danger from a dangerous and truly evil killer. I was eager to keep reading and find out what would happen next. The ending is exciting and satisfying. Overall, I like the book, but think readers who have been following the series more closely will enjoy it even more. I also think fans of Andrea Kane’s Forensic Instincts series would enjoy the book.